Zum Inhalt springen
The Century of the Self (Full Documentary)

The Century of the Self is a British television documentary film that focuses on the family of Sigmund Freud, particularly his daughter and nephew,‭ ‬who influenced the way corporations and governments throughout the‭ ‬20th century have thought about,‭ ‬and dealt with,‭ ‬people. “This series is about how those in power have used Freud’s theories to try and control the dangerous crowd in an age of mass democracy.” — Adam Curtis

Sigmund Freud, the founder of psychoanalysis, changed the perception of the human mind and its workings. His influence on the twentieth century is generally considered profound. The series describes the ways public relations and politicians have utilized Freud’s theories during the last 100 years for the “engineering of consent”. Freud himself and his nephew Edward Bernays, who was the first to use psychological techniques in public relations, are discussed. Freud’s daughter Anna Freud, a pioneer of child psychology, is mentioned in the second part, as is one of the main opponents of Freud’s theories, Wilhelm Reich, in the third part.

Along these general themes, The Century of the Self asks deeper questions about the roots and methods of modern consumerism, representative democracy, commodification and its implications. It also questions the modern way we see ourselves, the attitudes to fashion and superficiality. The business and, increasingly, the political world uses psychological techniques to read and fulfill our desires, to make their products or speeches as pleasing as possible to us. Curtis raises the question of the intentions and roots of this fact.

Where once the political process was about engaging people’s rational, conscious minds, as well as facilitating their needs as a society, the documentary shows how by employing the tactics of psychoanalysis, politicians appeal to irrational, primitive impulses that have little apparent bearing on issues outside of the narrow self-interest of a consumer population. He cites Paul Mazer, a Wall Street banker working for Lehman Brothers in the 1930s: “We must shift America from a needs- to a desires-culture. People must be trained to desire, to want new things, even before the old have been entirely consumed. […] Man’s desires must overshadow his needs.”

To many in both politics and business, the triumph of the self is the ultimate expression of democracy, where power has finally moved to the people. Certainly the people may feel they are in charge, but are they really? The Century of the Self tells the untold and sometimes controversial story of the growth of the mass-consumer society in Britain and the United States. How was the all-consuming self created, by whom, and in whose interests?

In Episode 4 the main subjects are Philip Gould and Matthew Freud, the great grandson of Sigmund, a PR consultant. They were part of the efforts during the nineties to bring the Democrats in the US and New Labour in the United Kingdom back into power. Adam Curtis explores the psychological methods they now massively introduced into politics. He also argues that the eventual outcome strongly resembles Edward Bernays vision for the “Democracity” during the 1939 New York World’s Fair. It is well-known his series was inspired and informed by a book written by the American historian, Stuart Ewen, “PR! A Social History of Spin.”

The Century Of The Self | Das Ego-Jahrhundert (Documentary 4h ENG 2002): 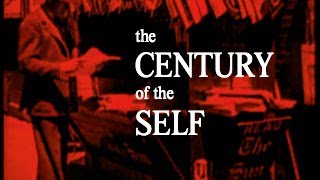