Passt zu: Toxic City | Deutscher Giftschrott für Ghana (Dokumentation) https://videogold.de/toxic-city-deutscher-giftschrott-fur-ghana-dokumentation/ Agbogbloshie is a suburb of Accra, Ghana known as a destination for legal and illegal exportation and environmental dumping of electronic waste (e-waste) from industrialized nations. Often referred to as a “digital dumping ground”, millions of tons of e-waste are processed each year in Agbogbloshie.

Processing electronic waste presents a serious health threat to workers at Agbogbloshie. The fumes released from the burning of the plastics and metals used in electronics are composed of highly toxic chemicals and carcinogens. Workers often inhale lead, cadmium,dioxins, furans, phthalates and brominated flame retardants.

Exposure to these fumes is especially hazardous to children, as these toxins are known to inhibit the development of the reproductive system, the nervous system and the brain. This short Mood-Documentary is recutted from the material of the german Documentary “Die Kinder der Toxic City” which i shot this year as a second dop with Jürgen Steiger as the first dop with Christian Bock -Director- in Ghana.

This pictures are all shooted by me… Chris Caliman in 2011 (Canon 7D)
Music: Gustavo Santaolalla – Can Light Be Found in the Darkness?
here is the link to the original full lengh german documentary from the ZDF:
Toxic City | Deutscher Giftschrott für Ghana (Dokumentation)
https://videogold.de/toxic-city-deutscher-giftschrott-fur-ghana-dokumentation/ 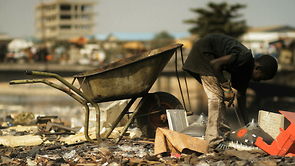